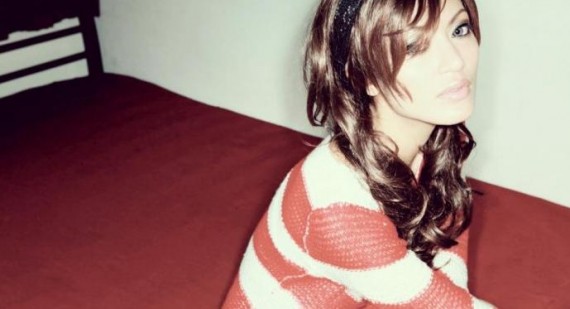 Girl Of The Week: Jan Yousagoon

Many of you may not know too much about Asian model Jan Yousagoon but she is certainly a woman on the up. Not only is the model an aspiring actress but she also has plans beyond that. Jan explained, “This year, I'm going to open my own coffee shop very soon and I plan to go to scuba diving somewhere in south of Thailand. Also, I plan to go to meditation in a few places around Thailand. That’s my favourite things to do. I love scuba diving and meditation.” Jan decided to make the transition from modelling into acting in a bid to prove to an ex boyfriend that she has what it takes to make it on the big screen. Yousagoon added, “It was around 2010 there is also a story. I was dating with some director guy at that time and we broke up (I have so many stories about guys haha) and I just wanna show him that I can do it too. And I ask one of my friend that what to do if I want to become an actress. He introduced me to some people and that is the first start.”

Jan was also kind enough to take some time to talk to Fansshare on a more personal level:

FS: When did you realise that you wanted to be a model?

JY: There is a story haha. When I was 22-23 and just broke up with my boyfriend at that time.. He told me that I'm not beautiful enough to be a model ( He was a model in Bangkok) and I will never be like all those model girls. After then I join Facebook around 2006-2007 and there is some photographer noticed me and ask to photograph me and I join Maxim contest later on and also I got many jobs from Facebook.. it actually comes out of my anger! My ex still angry at me and he probably hate me now tho haha but it doesn't matter anymore

FS: What can you tell us about the movie Trade of Innocents?

JY: At first I never thought I would get the role because it was my first casting for the movie and it surprised me but they must saw something in me and It was the best experience I have ever had for the first time! Very lovely film crew, the director, producer and everyone on the set and work with Mira Sorvino, Dermort Mulroney and John Billingsley. They are so kind and so nice to me. I had a wonderful time working on set with them and It's one of the best movie of this year I must say, heart breaking and based from real events. You guys should check it out and bring some tissues because you will need it!! FS: Do you have any more movie work coming up?

JY: Yes, there will be another movie coming up. A Stranger in Paradise with Colin Egglesfield, Catalina Sandino Moreno and Stuart Townsend. Also Dragonwolf movie. And there will be a horror movie that I'm a main cast too. What is it I will tell you more later but I will keep it as a secret for now haha

FS: What are your career aspirations?

JY: I want to be successful in everything I do. I have quite a few projects I want to do in the future, to be well known as an actress also one of them, master scuba diver, open a restaurant ( I love cooking), travel around the world, and have my own home stay resort somewhere in Thailand but most of all.. I want to be able to follow the Buddha step. To find inner peace in my mind, live a simple life and be happy

FS: We notice you spent a night out with former Manchester United footballer Lee Sharpe, how did that come about?

JY: Oh that was last year. Me and my friend was just gonna go for karaoke and we went to Manchester United bar because our friend is the owner there and that night there was some kind of champion exclusive party or something and they were quite a few footballers they already there, so we got introduced. We sang almost 50 songs!! and we were dancing together After we sit there for awhile me and my friend decided to go somewhere else and we ask them to join with us so Lee and his friend came to join us at the party after and we were party until 6 am! And we end up eating Taco at 6.30.. it my normal night out but just Lee and his friend joined our party, that's all. So would you like to join me to party? I will show you the best night out in Bangkok!! haha FS: Have you seen anymore of him since?

JY: Haha no, I don't think he even remember me FS: If you were stuck on a desert island, what three things would you need with you?

FS: Now, one for a bit of fun as we like to document this stuff, what is the worst chat up line you have ever heard?

Many interviews with Jan Yousagoon show that she is clearly a very racy person who is certainly not shy about talking openly and honestly about things. Jan explained, “Most of the time just for fun and I like to be honest and speak out my mind you know. It probably too much for some people who never know me before but if among friends they all know I like to joke a lot. But actually I'm (secretly) naughty and pervert haha. What I like to do for fun? Play with my dog and hang out with friends and PARTY!!”

You can catch Jan Yousagoon, starring alongside Mira Sorvino, Dermot Mulroney and John Billingsley, in the Christopher Bessette movie Trade of Innocents, which is set to be released on September 28.

71 Fan Uploads: Jan Yousagoon and Girl of the Week Gallery