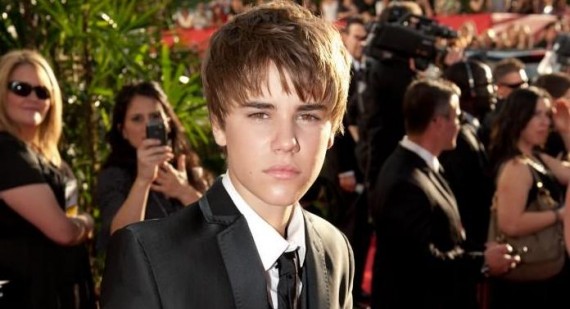 The woman claiming that pop sensation Justin Bieber is the father of her baby might be trying to get him to take another DNA test, but the 17-year-old heartthrob is just continuing to do what he does best: Sing.  Justin took to the stage to perform at the Rockefeller Center in New York today in front of hordes of screaming fans. And it seemed Justin wanted to treat his fans to a little Holiday surprise and was joined on stage by Usher and Busta Rhymes as they filmed the lighting of the Christmas tree in the city.

While Justin is carrying on with his life, the woman claiming that he is the father of her son is said to be asking for the singer to take a second paternity test. According to the NYDailynews.com, Mariah Yeater’s lawyer is requesting that the singer take another test. The website reports that her lawyer, Jeffrey Leving, said that the single mother deserves the right to meet with the singer and be present when he gets swabbed.
The lawyer told the news site: ‘I want a new DNA test with both sides together at a lab in California as soon as possible. As soon as I tell her to do it, she’ll do it. We need proper protocol and a chain of custody.’ It has also been reported that he is speaking with Bieber’s lawyer Howard Weitzman. Weitzman repeatedly has refused to comment on the claims but a spokesperson for Justin told MailOnline: 'Justin has taken the test. There is currently no case pending against him and there's been zero evidence supporting this claim.'
Justin has already taken one DNA test to prove he is not the father of a fan's baby. In an interview with US chat show host David Letterman, Bieber confirmed that he had taken the test, adding 'they just swab your mouth.' Bieber also said that he could 'smell a weasel' about the allegations, adding 'it's pretty crazy [that] people make up false accusations. 'It's going to happen. Being in the spotlight, people can say whatever.'
The star continued his promotional duties on the Today show this morning, where he performed his Under The Mistletoe. While Yeater was said to be willing to submit her baby for testing, there was some suggestion that she was trying to avoid or delay the test for as long as possible. Attorney Jeffrey Leving told website TMZ that she can't wait to compare baby Tristyn's DNA with Justin's.
200 Fan Uploads: Justin Bieber and Rockefeller Center Gallery