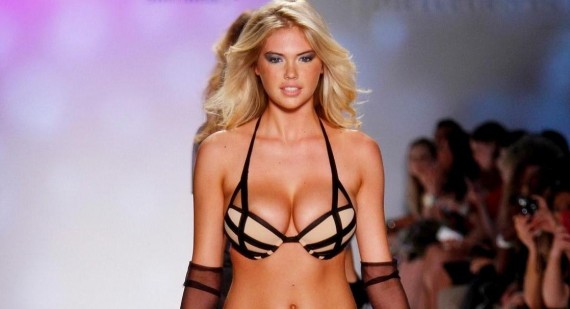 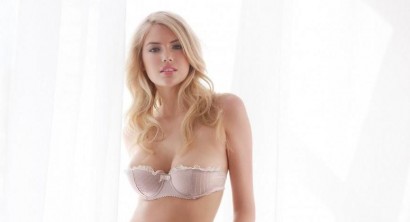 Kate may be one of the world's biggest models at the moment, but it's hard to recognize her in a new shoot for the July issue of fashion bible Vogue.
The swimsuit model shows her sophisticated side, covering up in a selection of sophisticated fall clothing.

Kate - famous for sporting a skimpy red bikini on this year's Sports Illustrated Swimsuit Edition - instead struts her stuff in a knee length dress, knee high boots and a striped coat with fur collar. In fact, she's barely flashing any skin at all, a far cry from her risque shoots from Sports Illustrated, and more recently GQ magazine. 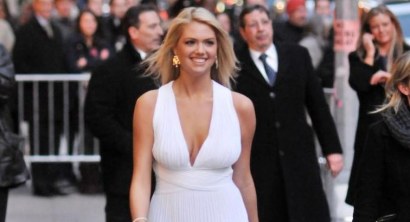 In the accompanying interview, Kate tells Vogue, "I'm from Florida, where your whole wardrobe is flip-flops, cutoffs, and bikinis. Now I enjoy fashion so much, but I don't think people realize it, because I'm always in a bikini!"
In the latest issue of GQ, she dons a patriotic red, white and blue bikini while licking a similarly American looking popsicle. Though Victoria's Secret reportedly shunned the model - labelling her tacky looking - Vogue editor Anna Wintour obviously had other ideas, and the shoot is already gaining rave reviews from Kate's army of Twitter followers.

The model is a largely self-created internet phenomenon, having embraced social media throughout her rise to fame. A YouTube video of her dancing at a basketball game in Los Angeles went viral, as did a notorious scantily-clad clip of Kate performing the 'Cat Daddy' dance routine, directed by Terry Richardson.
200 Fan Uploads: Kate Upton and Gallery