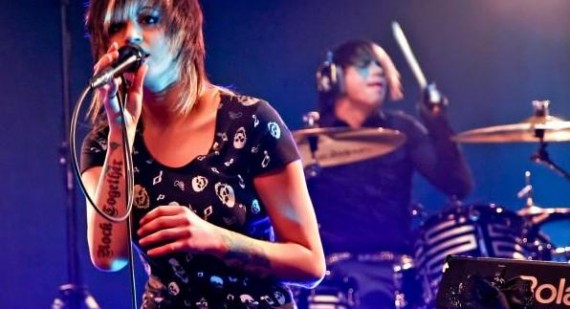 With the upcoming and long awaited release of Shiny Toy Guns third album the band has continued its teasing effort by launching a contest to win copies of 'The Sun' and an exclusive Skype session with Carah Faye.

The album's release date at time of writing isn't clear but Shiny Toy Guns have run a brilliant campaign which has seen the reintroduction of Carah Faye and the new entry of Carah's long term boyfriend and Versant band mate Daniel Johansson.

Daniel Johnansson is no stranger to Shiny Toy Guns as he was touring with them as part of their entourage before the brief parting of Carah from the Shiny Toy Guns due to constant touring which caused friction within the band.

The ongoing competition can be seen at www.shinytoyguns.com - We will of course keep you posted with any album developments.

Shiny Toy Guns return to greatness with new album III, out today
22nd October 2012 @ 11:01am
It has been a long and tough road for Shiny Toy Guns, full of ups and downs but it appears that the band are back to their best.